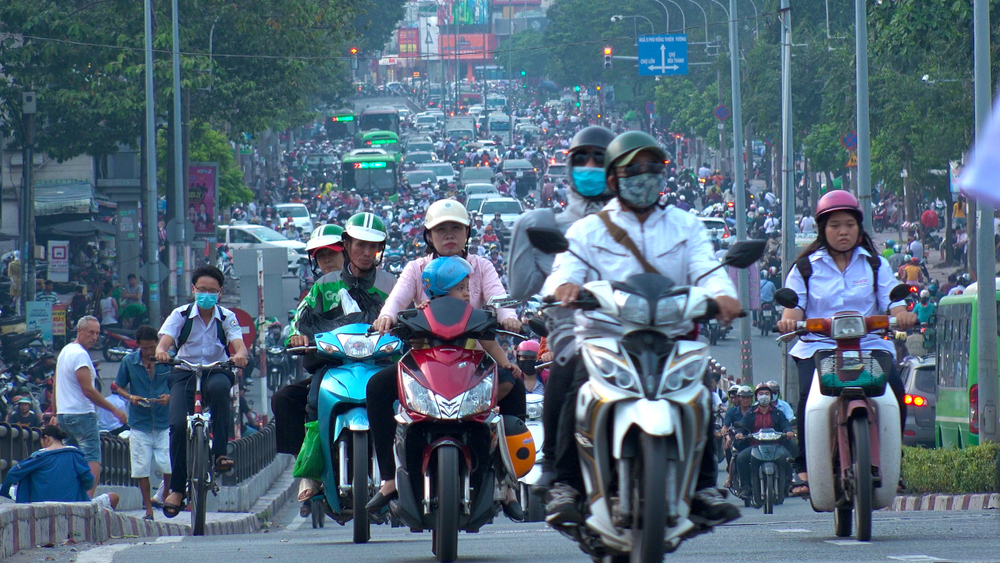 Motorcycles are a popular mode of transport in Vietnam, and helmets are required. 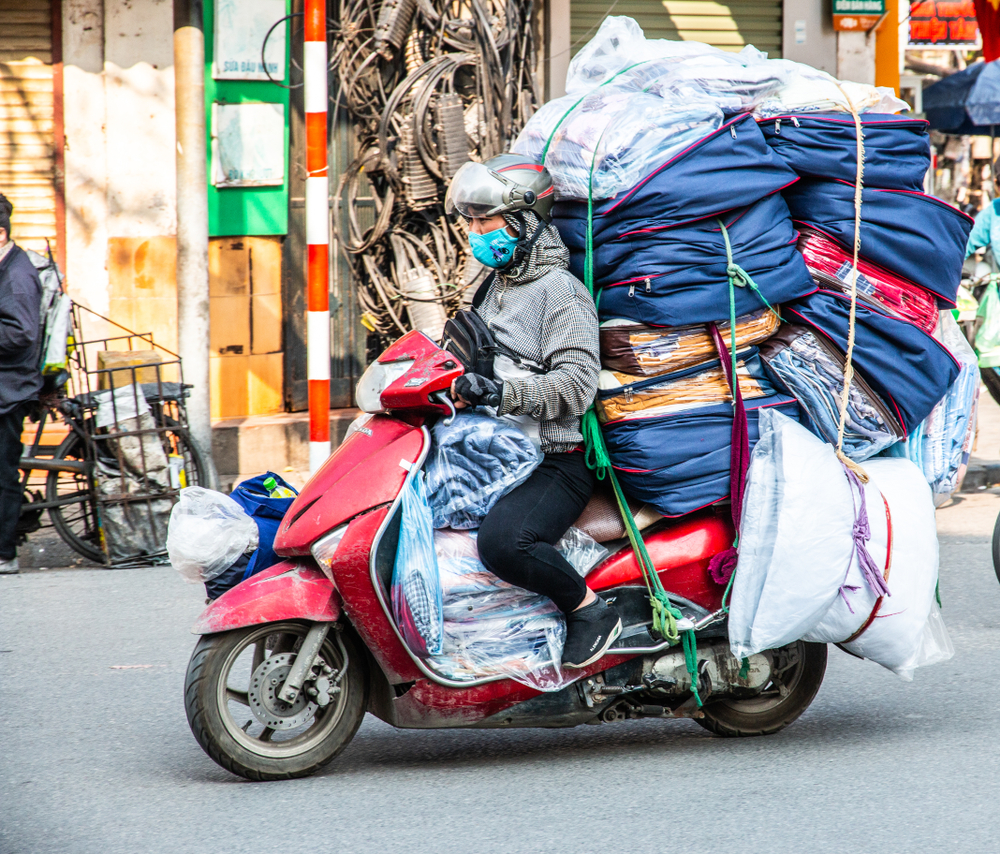 Motorcycles are even used to transport goods. 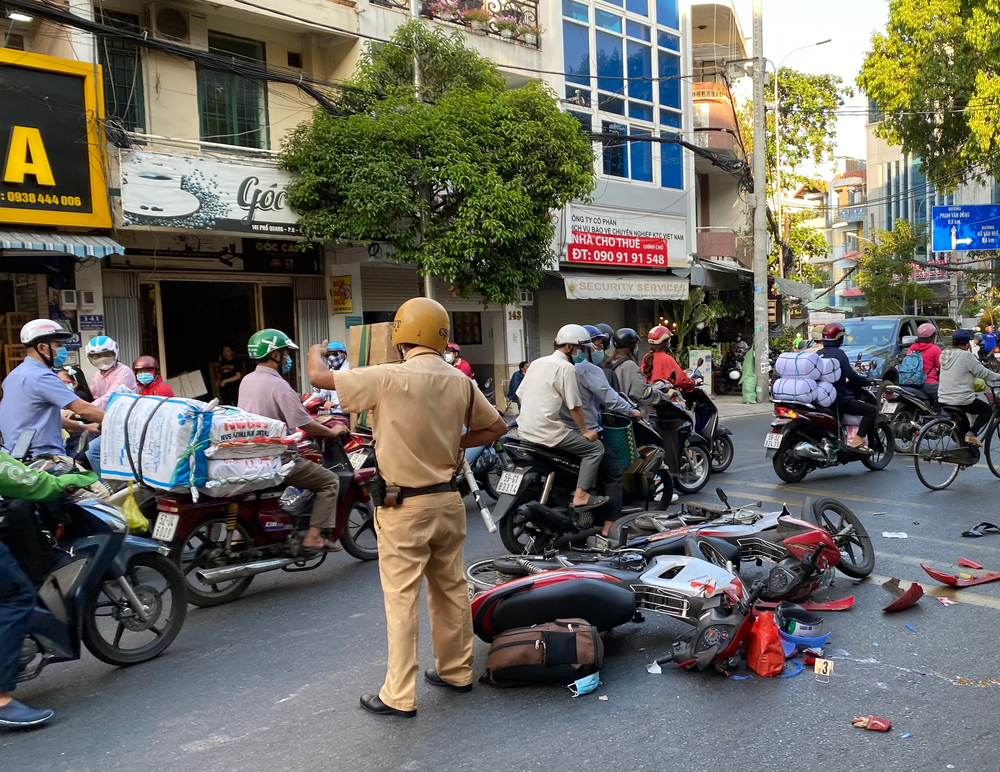 In the case of an accident, call 113 for police or 115 if an ambulance is needed. 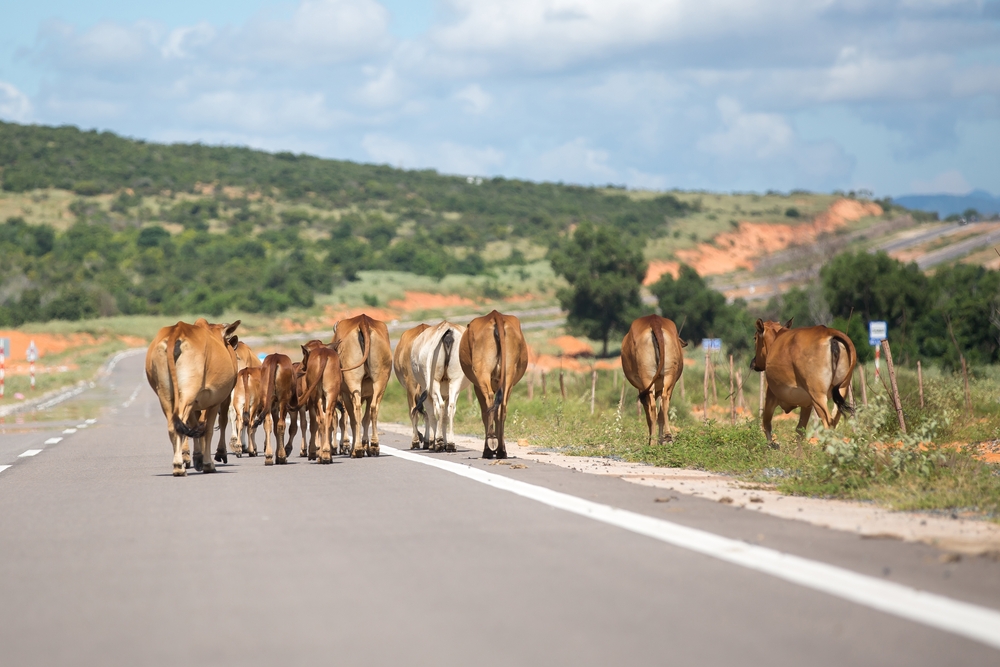 In rural areas, it is not unusual to see livestock on roadways.

While in Vietnam, you may encounter road conditions and driving practices that differ from your home country. Drivers operate their vehicles on the right-hand side of roads. In Vietnam, it is illegal to drive with a foreign driver’s license, and International Driving Permits are not recognized by the traffic authorities. The police frequently target foreigners when pulling drivers over for traffic violations, and if you are caught driving without a Vietnamese driver’s license, you can face punishments as extreme as prison time. If you are involved in an accident that caused a death while driving in Vietnam without a Vietnamese license, you could be imprisoned for up to 20 years. If you wish to drive in Vietnam, you should contact any office of the Provincial Public Transportation Service of the Vietnamese Department of Communications and Transport to obtain a Vietnamese driver's license.

Traffic in Vietnam is chaotic and traffic accidents occur frequently. The most common victims are motorbike riders and pedestrians. Dozens of people die each day from transportation-related injuries and many more are injured, often with traumatic head injuries. Traffic accident injuries are the leading cause of death, severe injury, and emergency evacuation of foreigners in Vietnam. Traffic accidents, including those involving a pedestrian and a motorized vehicle, are the single greatest health and safety risk you will face in Vietnam.

Drivers frequently cross to the left to pass or turn, and motorcycles and bicycles often travel (illegally) against the flow of traffic. Drivers honk their horns frequently, often for no apparent reason. Streets in major cities are choked with motorcycles, cars, buses, trucks, bicycles, pedestrians, and cyclos. Outside the cities, livestock compete with vehicles for road space. Sudden stops by motorcycles and bicycles make driving particularly hazardous. Nationwide, drivers do not follow basic traffic principles, vehicles do not yield right of way, and there is little adherence to traffic laws or enforcement by traffic police. The number of traffic lights in Hanoi and Ho Chi Minh City is increasing, but red lights are often not obeyed. Most Vietnamese ride motorcycles; often an entire family rides on one motorcycle.

If you are walking, you should be careful, as sidewalks are extremely uneven and congested, and drivers of bicycles, motorcycles and other vehicles routinely ignore traffic signals and traffic flows, and even drive on sidewalks. For safety, you should always look carefully in both directions before crossing streets, even when using a marked crosswalk with a green walk light illuminated.

Road conditions are poor nationwide. Numerous accidents occur due to poor road conditions and during the rainy season due to landslides. You should exercise extra caution in the countryside, as road conditions are particularly poor in rural areas. Driving at night is especially dangerous, and you should exercise extreme caution. Roads are poorly lit, and there are few road signs. Buses and trucks often travel at high speed with bright lights that they rarely dim. Some motor vehicles don't use any lights, and vehicles of all types often stop in areas of the road that have no illumination. Livestock are often in the road.

A law mandates the use of motorcycle helmets on all roads and is strictly enforced. Wearing a helmet when you ride a motorcycle or bicycle is strongly encouraged. Vietnamese vehicles often are not equipped with working seatbelts; however, when a seatbelt is available, you should always use it, including in taxis. Child car seats are typically not available in Vietnam.

The Vietnamese government has a zero-tolerance policy for drinking and driving—if you are discovered with any amount of alcohol in your system, you could face fines, imprisonment, and other sanctions. However, the police are poorly equipped to test blood alcohol level, and do not have the manpower to run consistent roadside checks. As a result, enforcement of the strict drinking and driving rules has been extremely irregular. Penalties for driving under the influence of alcohol or causing an accident resulting in injury or death can include fines, confiscation of driving permits, and imprisonment. Foreign citizens involved in traffic accidents have been barred from leaving Vietnam until they have paid compensation (often determined arbitrarily) for property damage or injuries.

Emergency roadside help is theoretically available nationwide by dialing 113 for police, 114 for fire brigade, and 115 for an ambulance. Public telephones are generally not available and trauma care is not widely available.